The millions of young people forgotten amid pandemic response 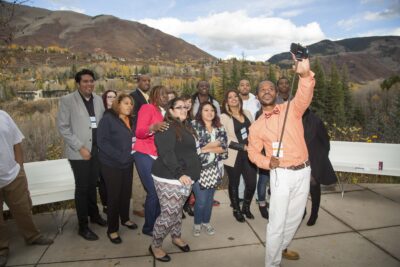 Melody Barnes is the chair of the Aspen Institute Forum for Community Solutions and Opportunity Youth Forum. She is co-founder and principal of MB2 Solutions, a domestic strategy firm, and a senior fellow and Compton Visiting Professor in World Politics at the University of Virginia’s Miller Center. Among her many previous roles, Melody was assistant to President Barack Obama and director of the White House Domestic Policy Council from 2009 until 2012. This piece was co-authored by John Bridgeland, who served as director of the White House Domestic Policy Council, assistant to the President of the United States, under President George W. Bush. This piece originally appeared in The Hill.

As Congress debates its next steps to save and rebuild the economy, it would be wise to remember the nearly 5 million “Opportunity Youth” — young adults aged 16 to 24 who aren’t in school or employed, but were overcoming great odds to improve their lives before the pandemic hit.

It is common for people to discount opportunity youth because some were recently homeless or involved in the juvenile justice or child welfare systems. But, as former domestic policy advisors to two presidents — one Democrat, one Republican — we work with many of them, side-by-side; recognize their potential, goals and contributions; and know a full recovery from this crisis will not occur without them. Opportunity youth play an increasingly critical role in our communities and our economy.

The pandemic has ushered in unprecedented unemployment among young people in America. Nearly 8 million workers under the age of 30 are unemployed. Three million dropped out of the workforce between mid-April and mid-May. Blacks and Latinos have been hit harder than other racial groups. As young adults who are disproportionately from communities of color, the implications for opportunity youth are laid bare as these numbers continue to rise.

It is common for people to discount opportunity youth because some were recently homeless or involved in the juvenile justice or child welfare systems. But, as former domestic policy advisors to two presidents — one Democrat, one Republican — we work with many of them, side-by-side; recognize their potential, goals and contributions; and know a full recovery from this crisis will not occur without them.

During, and in the years following the Great Recession, the number of opportunity youth was close to 6 million. By 2018, bipartisan collaboration brought the numbers down to nearly 5 million. But, even then, we still needed an additional $4 billion in federal investment to reach 1 million more, every year, so they have the support, education and training to become connected and productive members of society.

The wide-ranging and catastrophic effects of the current crisis on both the economy and the educational system are reversing progress. Measure of America, a project of the Social Science Research Council that has studied youth disconnection for nearly a decade, estimates that the number of opportunity youth in 2020 could swell to nearly 9 million teens and young adults.

The pandemic has caused many job training and service programs to shut down. Some of these programs were training young people to be health care workers, first responders and other professionals who could be crucial to our pandemic recovery. Immediate emergency funding is needed to shift training online, tailor it to high demand jobs and mitigate the effects of young people’s likely lack of access to summer and other jobs in a battered economy. These solutions are a win-win, as they work for opportunity youth and others, too.

We also need better mechanisms to get cash assistance into the hands of these young adults and other low-income populations so they can reconnect to school and work. Some opportunity youth have not received stimulus checks because they found the systems too difficult to navigate, the paperwork too challenging or the required documents too hard to locate. Others missed out because they were experiencing homelessness or because they were claimed as dependents by adults who don’t support them.

Congress can strengthen response measures for opportunity youth without reinventing the wheel. They can build on successful bipartisan strategies and program models helping youth get “Back On Track,” which federal evaluations have found to double the odds that young people will be reconnected to school or work. Increased funding and flexibility in programs such as YouthBuild, the National Guard Youth Challenge Program, National Civilian Community Corps and the Workforce Innovation and Opportunity Act’s Youth Activities has also led to positive outcomes. This is encouraging given nearly 70 percent of opportunity youth said they wanted to serve in their communities but only 3 percent had the opportunity to do so.

Congress has an important opportunity to double down on what works for young adults at a time when millions need it more than ever. By extending proven solutions to help opportunity youth become full participants in the economy and their communities, Congress can help catalyze their recovery and that of many more. In the process, it can unleash the talents of a generation ready to continue their education, find productive work and give back to their communities and country.