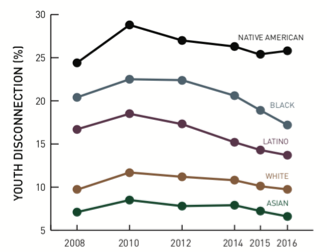 Measure of America’s new report More Than A Million Reasons For Hope announced that the numbers of opportunity youth (disconnected young adults, age 16-24) is down a total of 1.2 million people since the peak year of 2010. Based on 2016 data, they estimate that the youth disconnection rate is now 11.7% – or a total of 4.6 million young people without jobs or connected to school.

While still unacceptably high, it shows that progress is happening and a steady decline has occurred for the past 6 years, specifically a 20% overall reduction in the numbers. Unfortunately, some groups of opportunity youth experience larger disconnection rates than others.

Young people—particularly young men—of color, youth living in poverty or with a disability, and young mothers are all far more likely to be disconnected than their peers. As Measure of America reports, “There is a chasm of nearly 20 percentage points in disconnection rates separating racial and ethnic groups. Asian youth have the lowest rate of disconnection (6.6 percent), followed by white (9.2 percent), Latino (13.7 percent), black (17.2 percent), and lastly, Native American (25.8 percent) youth. Youth disconnection has decreased over time for all major racial and ethnic groups; however, the gap between the groups with the highest and lowest rates has not narrowed appreciably.” The report shows the power and importance of disaggregating data – and goes further than just looking at race alone. For example, it looks at groups within the Asian group, and finds a 10 percentage point difference between some subgroups.

On a state-wide level, 38 states experienced a significant improvement. Unfortunately rural areas continue to struggle the most with youth connection, experiencing significantly higher rates than other community types. The Aspen Institute Forum for Community Solutions is proud to support 24 different communities across the U.S. as a part of our Opportunity Youth Forum – including several rural and tribal communities. One of those communities is working to measure opportunity youth numbers, and proactively working to reduce disconnection in San Diego – the San Diego Workforce Partnership – which is profiled in MOA’s new report. The San Diego Workforce Partnership demonstrates that community’s commitment to equitably create more opportunities for youth in their community. We’ve experienced phenomenal success over the past six years, but 4.6 million youth without opportunities is far too many, and the gaps between groups are unacceptable. Working together, we can reduce the numbers of opportunity youth by another 1 million. Please join the Reconnecting Youth Campaign to support this effort and create opportunity for America’s young people.