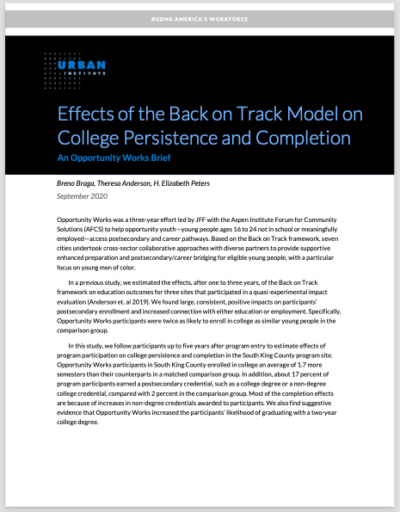 Opportunity Works was a three-year effort led by JFF with the Aspen Institute Forum for Community Solutions to help opportunity youth—young people ages 16 to 24 not in school or meaningfully employed—access postsecondary and career pathways. Based on the Back on Track framework, seven cities undertook cross-sector collaborative approaches with diverse partners to provide supportive enhanced preparation and postsecondary/career bridging for eligible young people, with a particular focus on young men of color.

A previous study found large, consistent, positive impacts on participants’ postsecondary enrollment and increased connection with either education or employment. Specifically, Opportunity Works participants were twice as likely to enroll in college as similar young people in the comparison group. Young men of color were six times more likely to enroll.

In this new study, we follow participants up to five years after program entry to estimate effects of program participation on college persistence and completion in the South King County program site, part of the Road Map Project (an OYF member community). Opportunity Works participants in South King County enrolled in college an average of 1.7 more semesters than their counterparts in a matched comparison group. In addition, about 17 percent of program participants earned a postsecondary credential, such as a college degree or a non-degree college credential, compared with 2 percent in the comparison group – more than an eight-fold improvement. Most of the completion effects are because of increases in non-degree credentials awarded to participants.