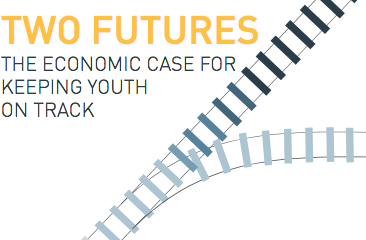 Measure of America, with support from Schultz Family Foundation, recently put out a paper that estimates the economic, social, and health costs of disconnection both for young people who experience it, and to taxpayers. The paper also looks at how keeping opportunity youth (16-24-year-olds not engaged in school or work) in school and in work benefits federal, state, and local economies.

Two Futures: The Economic Case for Keeping Youth on Track argues that one of the most important indicators of a community’s health, is the degree to which its youth and young adult population is adequately furthering their educations and securing positions in the working world.

The paper does these three things:

The research focuses on five key factors: education, earnings, homeownership, employment, and health. Among the paper’s key findings is that the biggest differences in those five key factors occur not while opportunity youth and those engaged in work and school are in their teens and twenties, but instead thirteen to fifteen years down the road, when they are in their thirties. See graphic below:

The research also found that on average, the federal government would gain $11,900 per year in additional tax revenue for every young person who remains in school and/or work. Multiply the tax revenue by the total number of opportunity youth – 4.6 million currently in the United States – and the federal government has the potential to accrue an estimated $55 billion in revenue each year.